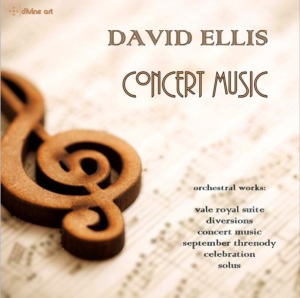 The big question with this is: why haven’t we heard of him? Most of us could remember at least one Cheshire poet laureate, most locals know of the famous footballers and rugby players with local connections, and artist David Shrigley is famous for being born in Macclesfield. (We once asked him if he’d driven through Congleton, so we could have a local angle, but sadly not).

And Ellis should be up there with the other notable Cheshire folk. Born in Liverpool, he studied at Manchester’s Royal College of Music, leaving with the Royal Philharmonic Prize and various other awards. Among his fellow students were Harrison Birtwistle, John Ogdon (who played at his wedding), Peter Maxwell Davies and Elgar Howarth.

He was an organ scholar at the Royal Manchester College of Music, but was more at home earning a living playing in workingmen’s clubs and pubs in the North West. Ellis worked at the BBC for many years, becoming head of music for BBC North.

Musically, he’s very English and leaning towards the pastoral, a sort of Elgar without the wind in the Malvern Hills.
This CD opens with The Vale Royal Suite, a five-movement 24-hour day compressed into 12 minutes of music — a leisurely morning, afternoon activity, early evening at rest, a midnight waltz, and tomorrow’s sunrise to finish. It’s nicely evocative of the Cheshire scenery.

Diversions is next, commissioned by Warrington New Town Development Corporation, apparently as part of a lobbying movement to make sure the M6 did not leave Warrington isolated. First performed by Manchester Camerata, it is a set of continuous variations, or diversions, in motorway tradition, with the sounds of traffic rushing by (and sounding its horn in places) elegantly described in music. We even think we detected some road rage in there.

Also on this CD are Concert Music, for strings and in four movements, and Solus, a 1973 commission from Manchester Camerata for its inaugural concert. The title refers to Copernicus discovering the relationship between the sun and Earth. Like Diversions, it is a set of variations, its theme of dawn to dusk reflecting life, from sunlight to death.

The most recent piece is September Threnody, for string orchestra, completed in 2011 and dedicated to Ellis’s wife, who died in 2009.