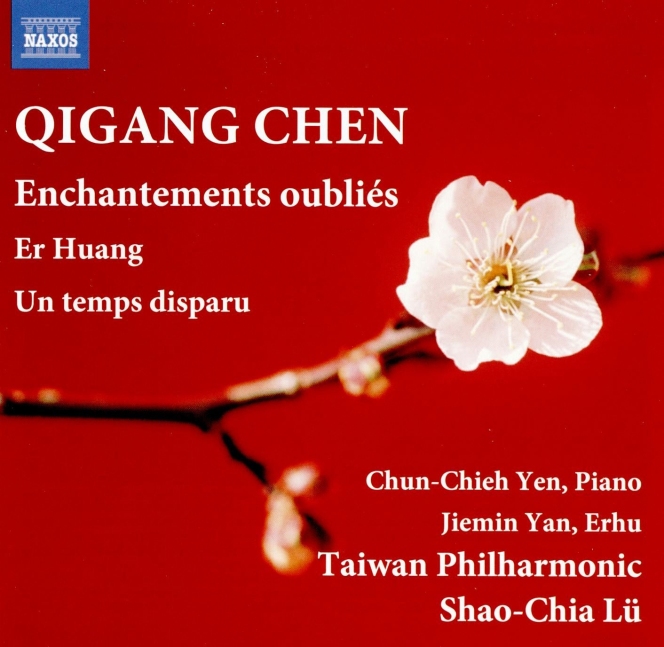 This is a remarkable album, successfully combining the sound of English pastoral music with traditional Chinese — from Vaughan Williams to the music from an arty martial arts movie — and played in a way that sounds alternatively intimate and imposing, and cinematographic in places. The end result is highly palatable, though we’d guess some purists might find it too easy. While some sections would play well on Classic FM, other sections are more edgy and modern.

Qigang Chen is a prominent Chinese composer, whose music has been commissioned and performed by orchestras and musicians around the world.

The opening piece Er Huang, commissioned by Carnegie Hall, is based on melodies from Peking operas, remembered from Chen’s childhood while at the same time acknowledging that western popular culture is erasing them. The music starts off slowly and gently, builds as if some kind of confrontation looms and then calms again.

Enchantments Oubliés was commissioned in 2004, although not performed until 2008. Chen says in the sleeve notes that he was trying to express what happens when we try too hard, the results of forced effort not being equal to just going with an original idea. He says he just went where the music took him. The piece ranges from the Vaughan Williams-like opening before the English pastoralism gives way to a livelier sound.

Closing piece Un Temps Disparu was written for cello and orchestra but adapted for erhu, a two-stringed Chinese fiddle. It makes use of an ancient Chinese melody called Three Variations on the Plum Blossom, itself written for zither. The piece apparently makes great demands on the player, Jiemin Yan.

This is an entertaining and accessible CD, the sections of Chinese music giving it an exotic feel while still having something quite English about it.

It also features Chun-Chieh Yen on piano, and the Taiwan Philharmonic Orchestra, conducted by Shao-Chia Lu. Out now on Naxos (8570614).