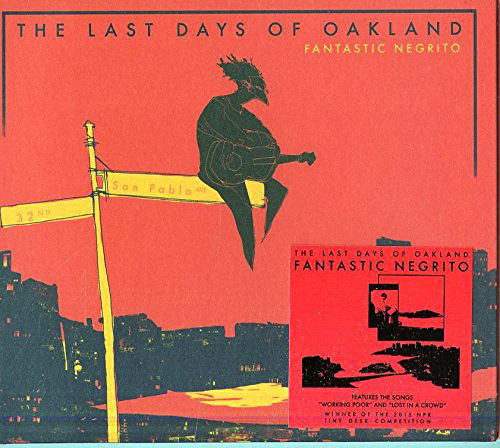 Dphrepaulezz was born in western Massachusetts, the eighth of 14 kids in a strict religious family. His Oxford-educated Somalian father ran a restaurant — his dad was born in 1905 so he has brother who is older than his mother.

He went into foster care aged 12 and was eventually rescued by a family when he was 14 (this is back in the 80s). But for a time he lived in cars and copied a classmate’s house key so he could sneak in, watch television and eat. He even made friends with the dog.

He didn’t start playing until he was an adult, when he used his house-hacking skills to pose as a student at UC Berkeley to get access to pianos. He’s now a multi-instrumentalist, playing guitar, vocals, keys and drums.

In his younger days, he moved to LA and a demo reached Prince’s manager, Joe Ruffalo, who took him off the streets and helped land him a $1m contract. He was opening for acts like De La Soul, but the money killed off his creativity.

He said in an interview last week: “I got lost, man, I couldn’t understand the commodifying of the music.”

In 2000 he’d basically walked away from the deal when he was in his car, and “woke up three weeks later with a beard”, after being hit by a drunk driver.

He almost lost his hand, which he now calls “the claw” because he can’t really move it. When he wants to play, he puts it in the right position “and just hacks away”.

He says: “It’s not useless, because that’s a terrible word, but it’s different. I shape the hand into a claw and beat the instrument into submission.” Even claw-like, he plays better than most people.

The £1m advance? He helped one brother get a Phd and another a master’s, bought his mother a house, and started an illegal nightclub, which opened midnight to 6am. “The cops loved me, they’d come in and smoke weed,” he says.

Then he jacked it all in and had a child. One day he couldn’t placate the toddler by doing all the things parents do so he played an open G on his guitar and the kid “exploded into a smile”.

“I couldn’t believe the power of that smile,” he said: “It’s someone saying ‘I love the vibration of this instrument’.” So now he’s playing again as Fantastic Negrito.

This man is a dude.

You could write a 5,000-word essay on the album title, too: The Last Days of Oakland is about how change is inevitable but a good thing. The Oakland of his youth is gone — the Oakland of crack, poverty and artists — and replaced by something else. Poor areas are always the most creative, because some people put creativity ahead of money and migrate to cheap areas, he says. Gentrification occurs and the people who put money ahead of creativity move in, but that’s not necessarily a bad thing because they bring other stuff with them.

The music is as good as you might think: bluesy rock that combines funk and bit of rap. Dphrepaulezz has lived it, and has soul. It’s Prince-like in that he covers genres but it’s rootsier than Prince (whom he never met) and more blues and funk or dance.