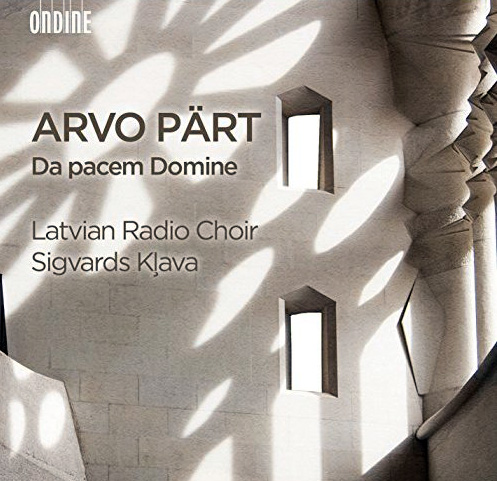 To call this CD awe-inspiring is like saying the Grand Canyon is big or Formula One noisy. Just as the Grand Canyon is so big it’s hard to take in the first time you see it, this is so awe-inspiring that it knocks the senses a little at the first play through. We visited Auschwitz earlier this year and it’s the kind of music you’d want playing in your head as you ponder the enormity of the murder carried out there, and the dignity of the people who survived.

Pärt is an Estonian composer of classical and religious music, who works in a minimalist style and uses his own technique, tintinnabuli, which seems to involve replicating the sound a bell makes as its sound fades. The music — performed here by the Latvia Radio Choir — has that quality, of a perfect sound on the edge of hearing.

His music is in part inspired by Gregorian chant and, on the basis of this CD, his compositions are meditative and thoughtful.

The opening piece is the three-movement Triodion, written in 1998 for the 150th anniversary of Lancing College. Chant and drone are staples but there is some variation. If it’s not his best work, the top spot can only be the second to Sieben Magnificat Antiphonen, which follows, a work in seven parts written around the central pitch of A. The works are meant to be sung as short pieces before the magnificat at vespers, sung on each of seven evenings before Christmas Eve. They are stirring and atmospheric pieces.

The rest of the CD is single-track works but no less impressive. There’s a couple of pieces with recognisable churchy names (Nunc Dimittis and Da Pacem Domine) as well as others that are less so, such as The Woman with the Alabaster Box, though that is based on a bible story.

On the sleeve, Pärt looks like an amiable cove but he clearly has a vitality belied by his look, though the amiability means there is nothing pretentious about his work.

It’s a powerful collection. You might not want to listen to it every day, but if the awareness of one’s microscopic tininess against the vastness universe is a feeling that gives you comfort, this is perfect.