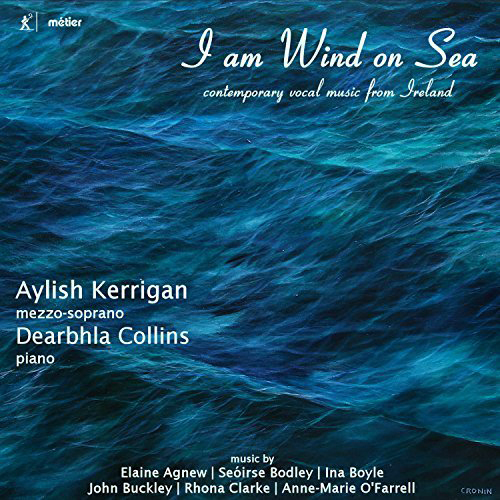 This is a selection contemporary vocal music from Ireland, six composers’ work presented by mezzo-soprano Aylish Kerrigan and pianist Dearbhla Collins. By contemporary we mean the last century or so and by Irish we don’t mean songs about whisky in jars: while some parts of this CD are charming, others are more challenging.

The opening composer is Ina Boyle (d 1967) with Three Songs by Walter de la Mare, these being The Song Of The Mad Prince, The Pigs And The Charcoal Burner and Moon, Reeds, Bushes. These are playful songs based on two humorous and one more serious poem, and close to being folk songs, with sprightly piano.

A fourth song from Boyle is Sleep Song, a lullaby set to words by Padraig Pearse, a calming song (obviously) using the countryside as inspiration.

A more other-worldly air comes with Elaine Agnew’s song cycle April Awake, based on poems by John Hewitt about a rural life. The Boyle songs were traditional, but the vocals here are more experimental, albeit engaging. One poem is set in April but the music is more evocative of autumn; two poems refer to ploughing and the music seems more of bare soil and brown leaves than spring.

Seóirse Bodley is next, After Great Pain, three songs set to poems from Emily Dickinson and Walt Whitman; as the title suggests, they concern pain and suffering. Whitman’s is I Am The Mashed Fireman, a sad poem about a fireman killed by a falling building: “Tumbling walls buried me in their debris … the pervading hush is for my sake.” The title piece and ‘Tis Not The Dying are pleasantly mournful, though the Whitman setting has more of the keening air about it.

The album closes with three single pieces. Anne-Marie O’Farrell’s Hoopoe Song is 10 minutes long and too varied to be a song, the hoopoe being a bird that flies across the divide in Jerusalem.

Rhona Clarke’s Smiling Like That has text from James Joyce and an electronic dance beat, which made it more accessible to our ears, though it’s still a bit out-there.

The closing piece is John Buckley’s I Am Wind On Sea and matches an old Irish poem with varied vocal techniques, such as tongue clicks and flutter tonguing, more usually used with wind instruments, and the singer playing woodblocks. It’s perhaps the most unsettling piece on the album.

Overall: interesting and not at all inaccessible, though there are sections you will take some getting used to. It’s also much better to listen to when it’s not being written about; better to let it wash over you than scrutinise every second.