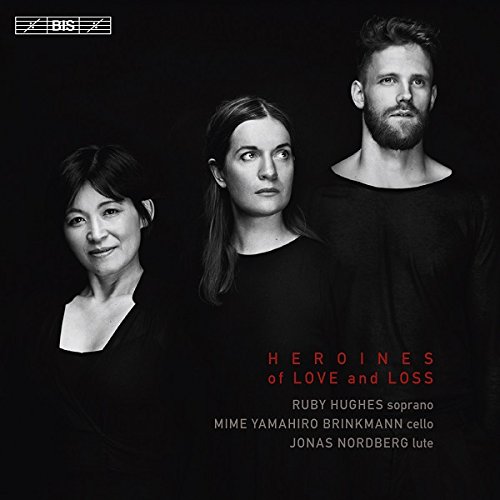 The way things work in general is that classical albums take a couple of plays to get into, whereas it’s the pop/rock tunes that have instant appeal; until now, we’ve never had a classical album with that “must play every day” thing you get with a catchy pop tune.

Until now;  Not that a collection of tunes centred around death and mourning has much in the way of obvious catchy tunes; like Nick Cave (reviewed here recently), it rather creates an atmosphere the listener can fall into.

Even though it’s outstanding soprano Ruby Hughes who makes the album great, the opening track features no singing but draws in the listener with its intensity. Toccata Arpeggiata by Giovanni Kapsberger is sombre but beautiful, featuring that fast/slow thing of classical Spanish guitar (though this is the lute of Jonas Nordberg). It reminded us of a scene in a spaghetti western, but the rather more erudite sleeve notes say it’s a precursor of works such as Vivaldi’s Cello Sonata in G Minor, RV 42, also on the CD and giving cellist Mime Yamahiro Brinkmann a chance to show off her skills. Vivaldi, Leone, what’s the difference?

But leaving aside the instrumental sections and the linked theme of women performers/composers and love/lost, the programme is mainly a vehicle for Hughes to show off her singing, and it’s gorgeous. Given the title, a mournful air dominates but Hughes’s voice is exquisite and the lute/cello accompaniment give it an air of gravitas and timelessness.

Women composers include Barbara Strozzi, Claudia Sessa, Francesca Caccini and Lucrezzia Vizzana (we had to check whether Alessandro Piccini was a woman). Despite the Italianate feel, the CD ends in England with Henry Purcell’s Dido’s Lament (able to melt the stoniest heart, says the sleeve notes) and “O death, rock me asleep”, the words allegedly written by Anne Boleyn as she awaited execution.