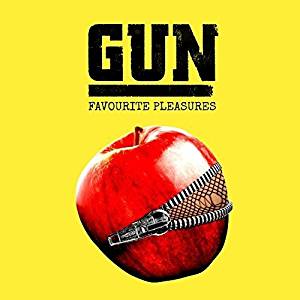 Gun, from Glasgow, are best known for their hit cover of Cameo’s Word Up. But they formed in 1987 and have kept going, releasing nine albums, Favourite Pleasures being the tenth.

As a melodic hard rock album, it’s impossible to fault, and we’re really enjoying it, which is, after all, the point.

This style of music is not famed for its variation and Favourite Pleasures is totally derivative of what’s been before; derivative in the sense of Hoover is the generic name for vacuum cleaning. Listening to it is like doing a pop quiz’s “spot the classic rock tune” round; it’s possible the title refers to the fact that they sat and listened to some favourite tracks and then nicked bits.

Here’s Where I Am is Kasabian’s … well, any Kasabian song, as they all sound the same. The title track is Led Zep’s Trampled Underfoot, before the lead break transmogrifies into the mid-song section from Ram Jam Band’s Black Betty. Another song nicks the feel of London Calling, while Silent Lovers borrows from … well, you can see the pattern. Silent Lover could actually be subtitled “RIP Chris Cornell” as there’s a definite Audioslave feel in places.

This isn’t true throughout: opener She Knows doesn’t sound like much else (unless we just need a wider listening experience) except a standard banging rock tune.

We’re not saying this is a bad thing, of course. The opposite in fact – the album is instantly familiar because of it. And they’re really good at what they do, ticking all the rock boxes in the right places: great melody, some fearsome lead guitar and not at all sounding like a band that’s been going for 30 years. As

far as energy levels and freshness, they reminded us of Hunter and The Bear, out earlier this year and an equally good melodic rock album, but a debut from hungry young lads. All credit to Gun for keeping up that enthusiasm. If you like melodic rock, you could do a lot worse.