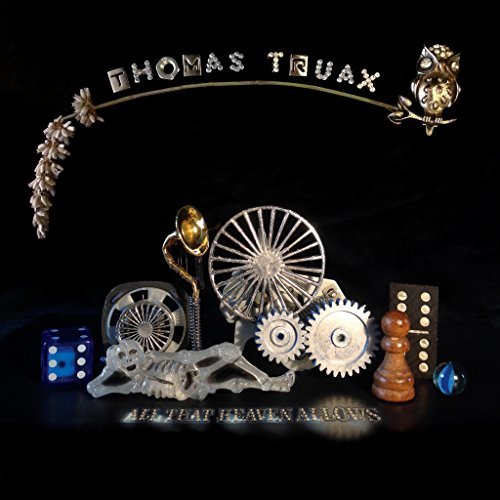 We’ve not Googled Truax as we like the fact he is a mystery; to find out he’s called Gary and the son of an accountant from Manchester or he’s really called Dwayne from Ohio would spoil the mystique. The best comparisons with Truax’s music are from film: Donnie Darko or David Lynch (upon whom Truax based on album).

The music first: it’s very good in bits, while other sections need some effort from the listener. It’s experimental in places, though never loud or jarring. The initial standout is single Save Me, with Gemma Ray, which is a good, sparse pop tune. He reprises it later in the album, which seems an oddly commercial move. Save Me features drums and strings, typical of the stripped down sound. In the past, we seem to recall Truax playing home-made instruments.

We suspect his fans love the lyrics. The opening two lines are: “Why would you try to get to heaven / When your one and only angel’s down here”. Fair enough, but Swimming Back To Wowtown / Granny Says Pt1 then turns its back on being a conventional love song, the next two lines being: “You’re gonna miss my Mississippi / But I’m finished with your river of tears” — ok so his gal could be called Mississippi — then: “The pioneers get the arrows and the settlers get the gold”. Right: so, you can see someone loving a person for the first time might find it harder than does the second someone to come along. But granny soon tells him: “You’ve got some Bad Leaders, Lots of Bad News / You’ve got a lot of fertiliser in which you can grow some blues,” throwing in politics. The rest of the lyrics are grammatically sound, so it’s clear the random capitalisation is a comment on Trump’s illiterate tweets.

Elsewhere, Save Me contains the line: “Rose says she’s not homeless / She’s got two homes in fact / She’s got the ribs across her chest / And the coat over her back,” which is clever and moving at the same time.

An album to work at but probably one that you could grow to love; this is the second or third of his we’ve had and it’s by far the best (or maybe just the first one we got a handle on). Try Save Me.