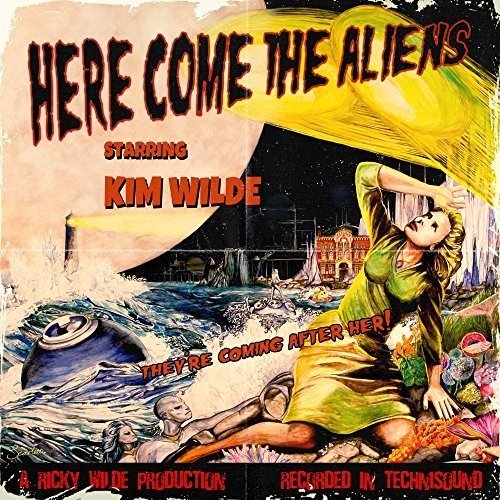 Yeah, so you’re Kim Wilde, pop singer, best known for being poptastic and slightly cheesy, and though you’re gigging aplenty, your new collection of songs is so good you want to reach a wider audience. What you going to do? How about package the new collection as a 50s pulp fiction sci fi film and hope it blindsides people enough that they’ll give it a chance and forget Kids In America, a song most of us would be happy never to hear again? That seems to be the plan, anyway.

When we got this CD, we weren’t sure what the score was: she popped up at Christmas with a festive single recorded with a satirical heavy metal band, so maybe this was a joint collaboration. Half way through we realised it was just a new Kim Wilde album but by then we were impressed. Your fiendish plan worked, Ms Wilde.

The backstory to this is that Wilde saw “aliens” over her house and “lives in fear” (The Sun) that they will return to beam her up and “force her to perform to the alien overlords” (The Sun again).

This story surfaced this month, just as her new album with “aliens” in the title came out, so one is possibly best taking it all with a pinch of salt.

Being journalists and all, we looked into this, and there really were reports of UFOs in January 2009 over St Albans. In 2009 the MOD collated 39 pages of reports of lights in the sky, the last line of this report being: “As of 1st December 2009… UFO sighting reports are no longer recorded or investigated by the MOD.” Presumably this was because staff were injuring themselves falling off chairs laughing.

Other mysteries in the same year were lights that “looked like a Chinese lantern”; something that “hovered above the house … drifted slowly away (and) louder than a helicopter” (if only the police helicopters would fly low and hover, you’d be part way to explaining that one); “lights heading from Birmingham Airport” (Could it be… no).

Then there were “glider-like objects in the sky”(2pm on an August afternoon, so definitely not real gliders); “a pinpoint… that was clearly a UFO”; “Seven aircraft over Derby” (disobeying the no-fly zone again!); “Terrestrials seen coming from King’s Lynn” — they’re all aliens in Norfolk so the humanoids stand out — and the two most baffling — “White fixed wing object flying over a field” and “like a highly-lit aeroplane with wings.”

Our favourites were “Helicopter reacted as if pilot was startled” — we’d love to see a startled helicopter — or at least it was until we came across: “Having a BBQ with some friends when saw an orange fireball about to crash two gardens away, but on checking it was high in the sky … another object appeared then a third spherical object with a leg protruding.” Stick to the beer, my friend.

Sorry, we digress, but Kim started it.

Opener 1969 is young Kim panicking about aliens after watching Neil Armstrong take his famous step (with Pacman sound effects for some reason); Pop Don’t Stop is a catchy tribute to pop music itself. Other songs are more serious: Solstice is about a man (we assume) going to sea and not coming home, touching because of the minor detail: “Your washing’s on the bed / The last words that were said”, while Cyber.Nation.War is about internet trolls. Closer Rosetta is about the question of life, death and if we are alone in the vastness of space. Are we? Or are aliens visiting in pinpoint-sized vessels disguised as Chinese lanterns?

This is a bit like the last Shakin’ Stevens album: a surprise that a performer perhaps seen as less than relevant can still deliver the goods. Expect a resurgence in her career.