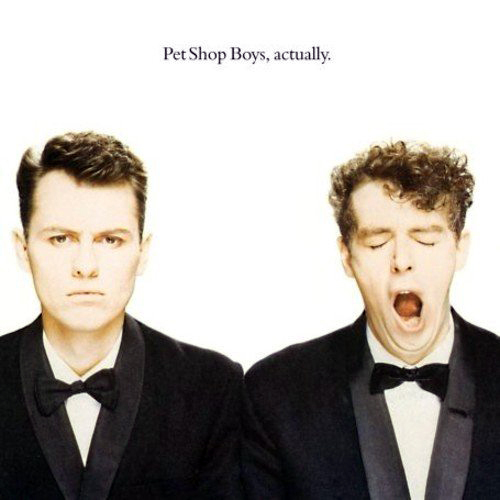 Another cracking album from the PSB: Actually (as in “Pet Shop Boys, actually”) was their second album, coming out in 1987 and being a critique of not only Thatcher’s economy but the whole 80s thing, from materialism to the post-Aids club scene.

The tunes are great: four massive hits (What I Have Done, Shopping, Rent and It’s A Sin) — and the sleeve notes are again entertaining, witty and interesting, revealing much about the song-writing process. Shopping was really about shopping — which they think is an amusing word in its own right — but as they couldn’t actually think of anything to say about it, they wrote about the consumerism of the 80s instead. The opening line “We’re buying and selling your history” is still relevant, given the recent Facebook scandal.

What I Have I Done To Deserve This is a love story but opens with the seemingly-political line: “You always wanted a lover, I only wanted a job”; very 80s. The song was co-written with Allee Willis, who wrote I’ll Be There for You, the theme from Friends (and September and Boogie Wonderland for Earth, Wind and Fire) AND it resurrected the career of Dusty Springfield.

It’s A Sin started off as a “religious” sounding riff and because of that they added more and more Catholic stuff to it, even recording “ambience” — this was the 80s after all — in Brompton Oratory. The bonus CD with this is good; some good 12” mixes, including a great What I Have I Done.