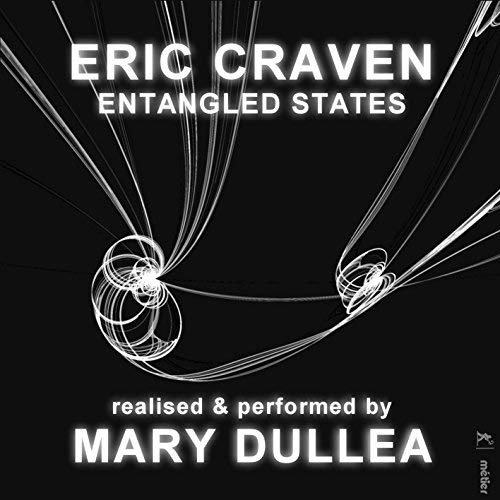 This double CD of solo piano (with the ever-reliable Mary Dullea) reminded us of Bach’s Goldberg Variations — not because of the variations (there aren’t any) but because of the way it wends in and out of your consciousness, and because there’s a lot of silence. (We also like Mr Craven: he emailed and thanked us for his last review on these pages, and a little kindness goes a long way).

Craven himself is a teacher, in Manchester, and shuns further biography, preferring to compose and go on his own sweet way. We remember he developed his own system of composition and allows chance to play its part in performance; now we look it up, the musical word is “aleatory” and his style is “non-prescriptive”.

One example would be allowing the players to arrange the fragments of music in a number of different sequences, or ask them to improvise. On this programme, Craven makes use of — as the name suggests — the idea of quantum entanglement, that pairs or groups of particles interact even when the particles are separated by a large distance. Einstein’s “spooky action at a distance” and Schrödinger’s feline “is he/isn’t he?” companion described this; modern quantum computers make use of it.

Do you need to know any of this? No. You can listen to music as it comes and remain in blissful ignorance of qubits.

The general idea seems to be that some pieces (disc one is tracks I-XXIV and disc two XXV-XLVIII) contain less information than others and the aleatory element is the performer improvising round Craven’s composition.

This lack of information doesn’t progress through the disk but is scattered around, so I and III are less improvised, VI more so.

Ms Dullea improvises where she needs to, and like a good writer can ape the style of different people, she presumably does a good job of inserting what Craven wants; perhaps he doesn’t want anything, just something. He is “non-prescriptive” after all.

What does it sound like? It lacks most of what music normally possesses but is neither unstructured or formless, Craven presumably providing the minimum of tempo and pitch, and it’s never strident or intrusive.

It also reminds us of Steve Hillage’s seminal ambient album Rainbow Dome Musick, which just emerges for a while and then stops.

It was recorded at Wyastone Concert Hall, Wyastone Leys, Monmouth.