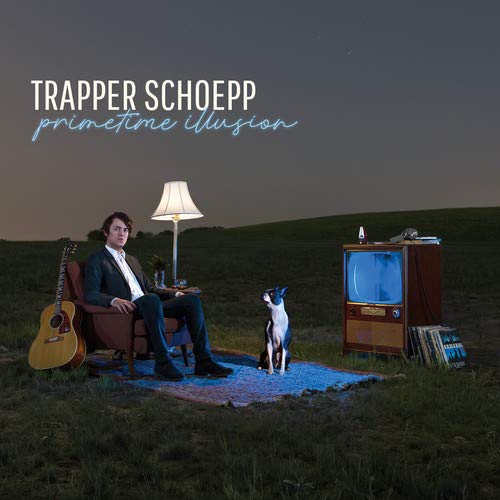 Schoepp is one of those artistes who sound like they’re going to be big, just because they’re so good. We thought it was a band but Trapper Schoepp is a real name of just one person, and Primetime Illusion is his third album. He writes songs about life, but in the same way as Squeeze write songs about life: they’re precisely drawn vignettes from an observant and witty eye. Musically, he’s a bit Squeeze in approach, too, with the songs carefully crafted pop with lots of production.

Opener is Shakedown, which kicks off with tom toms and is one of the musically more simple songs: being from Wisconsin he’s probably heard more Tom Petty than Difford/Tilbrook. Petty fan or not It’s Over is very Squeeze in its lyrics: “The papers are printed / The t shirts are made / The fat lady’s singing / and the champagne is sprayed”.

Despite titles such as Drive-Thru Divorce, the album is optimistic in tone, with plenty of melody and harmony and catchy hooks without ever feeling commercial; his gentle vocals and the careful arrangements perhaps prevent it feeling like pop. This is even true for What You Do To Her, a rollicking tune with uplifting harmonica, all about domestic abuse (we think).

Freight Train nods towards heavy rocky blues but never strays far from pop, while If All My Nines Were Xs has a riff worthy of Malcolm Young.

The talking point is Oh, Wisconsin. The lyrics of this ode to Schoepp’s home state were written by Bob Dylan in 1961, then lost for 50 years before being rediscovered by a former room-mate in 2017. Schoepp apparently took a screenshot of the lyrics from a news story and wrote the song; Dylan gave him permission to use it and getting a co-write with the great man “put wind in my sails,” Schoepp said. Well, it would.

Try What You Do To Her, the bubbliest song ever written about a drunk assaulting his wife.