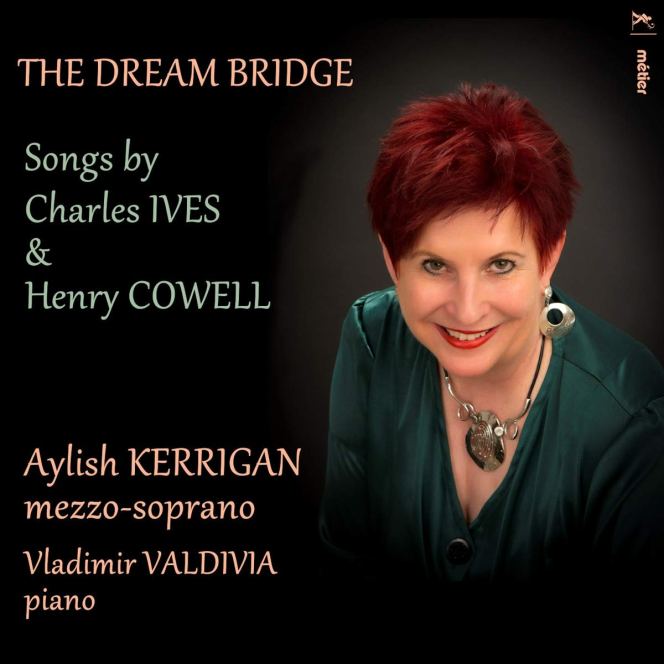 Charles Ives is called the father of contemporary American music, say the release notes. He was an innovator and a loner with a brilliant mind, and the songs chosen for this album range from the simplistic to the most complex, and represent the eclectic range of styles Ives used, from jazz to gospel. Henry Cowell was interested in spiritualism and mythology, and served time in prison for child abuse (later pardoned and released). He wrote more than 180 songs, most of which are unpublished and secreted away in libraries. Several manuscripts were obtained with the help of researchers to make this recording possible.

So: a loner and an alleged pederast whose songs are largely unknown today. (To be fair, Cowell was bisexual and jailed for an affair with a 17-year-old, which he freely admitted; his defence was a request for leniency on the basis that “he was not exclusively homosexual but was in fact in love with a woman he hoped to marry”. In San Quentin he taught fellow inmates, directed the prison band, and continued to write music at a prolifi c pace. We’re not sure why he was pardoned, as he admitted his “crimes”).

The wide mix of styles makes this a difficult album to listen to in one sitting.

The mixture is true within songs: Ives’ Old Home Day opens with maudlin piano and then turns into The Battle Hymn of the Republic (aka Mine Eyes Have Seen the Glory aka John Brown’s Body), closing with stirring, marching flute. The lyrics are a memory of a fife band playing in his youth (so perhaps the closing wind instrument is a fife).

Aylish Kerrigan, a mezzo soprano, accompanied by Vladimir Valdivia (piano) producing the sort of music that has the listener thinking of sunny days and rivers, around 1908, when people still had a front parlour.

Track five The Sideshow sees the tone change, a short song that’s more flamboyant and perhaps deliberately flagging up a change, with Old Home Day slightly harsher, the samples from other tunes aside. This more melodramatic air continues.

The second half of the programme opens with the bass end of the keyboard sound sombre as it creates the sound of waves for Tides of Manaunaun, a rather scary piano solo. Closer Aeolian Harp is also an instrumental on the strings inside the piano, creating an ethereal effect.

The second work, St Agnes Morning is based on a poem about a woman unable to sleep, and captures well an air of uneasiness, though it’s a fairly tranquil piece.

The Cowell section is more avant-garde and set music to a range of poets from Shelly downwards. The songs vary from the more series to the comic: Mice Lament is about mice moaning at the lack of food. For such a trivial topic it’s a weighty song, and very modern with (we think) the pianist hitting or kicking something to add atmosphere. The next song is about the lack of mice, thanks to a cat.

An interesting selection, just not all in one go. This is out now on Métier, MSV28577.

***
Support your local record shop! If you’ve not got one, support us (an independent newspaper) and buy this from here: