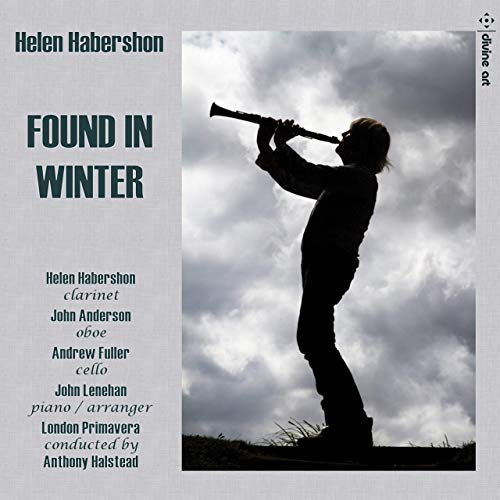 This is a very accessible collection — perhaps too much so for people who view themselves as “classical music” fans. The cd has television mini-series written all over it. Moby famously licensed every track from Play and we could see a similar thing happening here.

Habershon is inspired by the natural world and it is the main source for her music.

Found in Winter is meant to express “the many different faces of winter with its varied moods”, and the threat of climatic change, both cyclic and man-made. She is chiefly a clarinettist but after a serious injury to both wrists turned to composition, before picking up the clarinet again to record this album.
The work is very easy on the ear. It’s got all the instrumentation of classical music but the sound of pop; two previous CDs were album of the month and album of the week on Classic FM.

The start of opener Winter Arrives could be from Farwell To Kings era Rush, the bit before the band thunders in: expectant strings, piano, Neal Peart stroking his bells. Then, instead of guitar and drums, in comes a gentle tune somewhere between Vaughan Williams and an Irish folk air. It’s the music for a period drama’s opening scene as the heroine and her sisters runs through fields playing happily, while mummy lays out the picnic. The title suggests it’s meant to evoke snowy flurries but it’s more spring and summer.

Track two is Far Out In The Ocean and has the feel of standing on the deck with the wind in your face. The mini-series: two lovers are on separate boats going in opposite directions staring out at sea. A note of optimism suggest they will meet again. You get the drift. Enjoyable and easy to listen to.