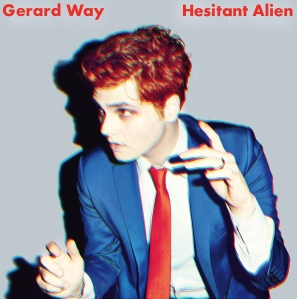 We were never massive fans of My Chemical Romance (too theatrical) but we like this solo album from the band’s main man a lot more.

There are shades of MCR on here (No Shows) but mostly it’s arty glam/pop — Way is obviously a fan of British music from Bowie and Bolan to Britpop.

Way’s now in his late 30s and had clearly tired of the MCR fanbase of young teens, and this is more grown-up, as well as being remarkably cheerful for a man who battles with depression.

Opener Bureau is our least favourite, all descending chords and a bit unsettling, like a Suede song being dragged through mud while singing a Gary Glitter cover.

After that it all lightens up with the poppier Action Cat, Brother, with its MCR-ish piano opening and the poppy Millions.

Zero is grungy and fuzzy pop (Jesus and Mary Chain) while tracks such as Juarez and Get The Gang Together nod towards QOTSA.

Closer Maya The Psychic lifts a riff from Ash but goes a bit too MCR for us at the end.

Overall: a solid album. There’s a couple of misfires but largely it’s bang-full of hooks and melody, with enough of the trademark Way sound to keep the fans happy.