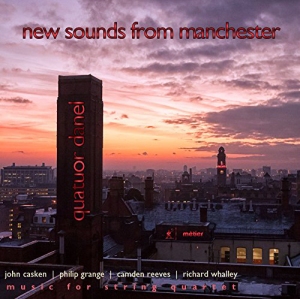 We’ve been enjoying this new CD from Quatuor Danel, the quartet in residence at the University of Manchester.

On this CD they present new compositions by four English composers associated with the university, two (John Casken and Philip Grange) already quite well known (so the Press notes say) and two younger ones, Camden Reeves and Richard Whalley.
The CD opens with Reeves’s Fireworks Physonect Siphonophore, written about a jellyfish-type creature than exists as a colony but behaves a single creature. The music conveys a pulsing creature moving through the sea, both as a solid mass and composed of small, darting components. The strings are played in a jerky, almost organic way, the instruments sometimes together and at other times drifting apart. Reeves also contributes Dactylozooid Complex, three pieces written about sea creatures armed with poisonous tentacles. It’s similar to Fireworks Physonect Siphonophore. Both pieces could be discordant but are sharply interesting rather than edgy.
Whalley’s work is Interlocking Melodies, a more conventional quartet piece inspired by a work by artist Willem do Koonig, of shapes floating in balance. Four whole tone scales are used, a quarter tone apart, say the sleeve notes, for those of you who understand.
Grange contributes Ghosts of Great Violence, inspired by WWI, while Casken’s piece is Choses En Moi, but we feel it’s Reeves who (to coin a dreadful phrase we will never use again) owns the CD. Out on Divine Art (MSV28546).