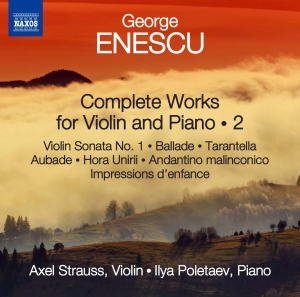 If you’re new to classical music, this is almost the definition of what you would like to expect.

Lively and easy to listen to, rich and full of energy, it’s classical music without the pretension. The opening section could easily be from a modern dance tune with a big staccato intro and then some mid-tempo but fast piano, and a catchy riff on the violin.If he was around now, Enescu would be writing cheesy European dance with mass appeal rather than being cool; probably big in Ibiza a decade ago.  He was 16 when he wrote the earliest works on here, so if he was alive today he’d be a European (he’s Romanian) keyboard wunderkind making millions from dance floor hits.Except of course he’s not so it’s the instruments of his time he uses, in this case violin and piano, and the surprisingly modern opening soon gives way to a pleasing melodramatic and more classical sound.
The second movement slows down but the teen Enescu still imbues it with a sense of energy and pace that is maintained throughout the album. Even though it’s just two instruments, it’s a very full sound.
Ballade Op4a has a gentle piano start but then a walking bassline comes in underneath, and introduces a rather anthemic (as in national, not football chant) sound under the more soaring strings, while still being melodramatic / romantic. Apart from his youth, the music is lively because he was influenced by Slavic folk traditions, and there’s a dancing sound in many places.
Out on Naxos 8572692.