Day At The Lake 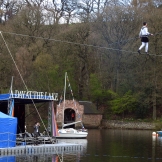 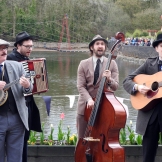 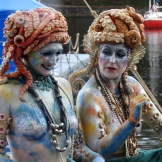 The clock was turned back over a century at a local beauty spot this weekend as its heyday as the Blackpool of the Potteries was recreated.

Wild Rumpus, organisers of the Just So Festival, took over Rudyard Lake over the weekend and laid on the entertainment that Potteries workers would have enjoyed in the mid-1800s, from live music to a tightrope walk.

The lake was built as a feeder for the canals but in 1846 the North Staffordshire Railway took over the canal and lake, and ran its Churnet Valley Line — between Macclesfield and Uttoxeter — down one side of the two-mile stretch of water.

As a result, the railway was able to ship in Potters from the city, eager to breathe some fresh air and get away from the pot banks, and by the end of the 19th century as many as 20,000 people visited the lake each day.

Among those were illustrator John Lockwood Kipling and Alice Macdonald, who met there on a trip from Burslem. They liked the place so much they named their son Rudyard after it, and his books in turn gave the name to the annual Just So festival; the event is now staged at Rode Hall, Scholar Green, but started life in the woods above Rudyard.

The crowds back then were so great that as well as the usual sideshows and attractions, some big names came to Rudyard, including Matthew Webb — better known as Captain Webb, and the first recorded person to swim the English Channel for fun — and the African Blondin, who twice performed tightrope walks across the lake.

The original Blondin — born Jean François Gravelet — was a French tightrope walker and acrobat known as the Great Blondin and he inspired many imitators, among them Carlos Trower, known as the African Blondin.

During two visits to Rudyard he not only tightrope-walked across the lake 100ft over the water but carried people and even cooked himself a bite to eat. Billed as the “Prince of the Air”, he appeared before 50,000 people during two weeks in 1878, his second visit.

Trower died in poverty but was not forgotten and his great grandson Ron Howard visited Rudyard, got in touch with the Friends of Rudyard, modern-day tightrope walker Chris Bull of the Bullzini Family and Wild Rumpus to recreate the day when the African Blondin was in his prime.

The three-day A Day At The Lake was born.

Friday dawned wet and cold, the late arrival of spring showing no respect for the work put in by event organisers. The crowd was equally cold and wet, and the helter skelter rose out of pools of water more akin to the pier at Blackpool than a recreation of the Blackpool of the Potteries.

The highlight of the weekend was the tightrope walk, set up across the dam end of the lake and running from two 30ft towers.

When the Chronicle visited on Saturday, it was to see the first walk across the lake in more than 100 years.

Bullzini was celebrating not only that but his first wedding anniversary: on 1st May, 2015, the real-life Mr Bull, (38), and his 26-year-old wife Phoebe tied the knot (literally) over the heads of 100 friends while tightrope walking over a valley at Wookey Hole Caves in Somerset.

As a man who was married 75ft in the air, can cycle across a tightrope and practises for six hours a day, the great Bullzini himself was clearly unworried by his feat and was spotted wandering the crowds before his first big walk looking calm and relaxed. He uses yoga to be mentally and physically prepared, so this was no surprise.

His walk was given a big build up by the commentator — with a round of applause for Mr Howard, who started the ball rolling — before Bullzini climbed the tower with aplomb, had a moment’s meditation to gather his thoughts and set off across the high wire.

Like The African Blondin he stopped at regular intervals, for a lie down, to stand on his head, to hang from the wire and to display other signs of nonchalance.

The original African Blondin did occasionally fall — Mr Howard’s website reports one fall when he “fell on a soft gentleman and was not hurt himself” — but Bullzini offered an entertaining but fear-free crossing. If the organisers wanted danger they would have given the amenable Cockney manning the helter skelter four double gins and told him to walk across the lake.

The highlight over for the time being there were many other attractions for visitors, with the Friends of Rudyard giving tours of the lake on a motor launch, performers on the floating stage and various acts about the dam wall. The programme of events repeated itself each day.

Real atmosphere of the Victorian age was given by the City of Birmingham Symphony Orchestra, playing on a floating stage and offering tunes that would have gone down as well in the 1890s as well as they do now.

There was also Dr Butler’s Hatstand Medicine Band — who sound as their names suggests — the Victorian Bathers Juggling Show, Yorkshire Life Aquatic — a dry land synchronised swimming team — and the Mermaids, who were, well, mermaids.

The Rudyard Light Railway — the track of which follows the route of the Churnet Valley Line — was also kept busy throughout the weekend.

The only thing missing was any mention of Ralph Rudyard — a local man reputed to have killed Richard III at the Battle of Bosworth Field, the king later unearthed in a Leicester car park and doubtless celebrating on Monday as his team cracked open the champagne. He could not have celebrated any more than the Wild Rumpus team, whose three days at the lake was an unqualified success