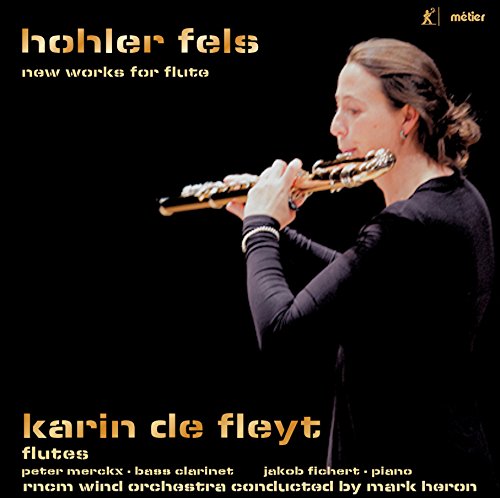 This experimental flute music is for those who like the flute and want to hear some technical playing but care little for melody (or pleasure, if we’re being harsh).

The opening song is Rolf Gehlhaar’s Grand Unified Theory of Everything, which stems from a lecture Gehlhaar attended. It opens with a lone piano key and a flute sound resembling bees — perhaps primordial chaos — before it develops into a sound more like plasma, with fundamental particles flying off. The early section, sticking with the microscopic (it gradually moves to macroscopic) is even jolly.

Christopher Fox’s Stone, Wind, Rain and Sun opens with the sound of rain falling (impressive, on a flute — it’s an amplified alto flute). Fox says one’s imagery of choice should be a wander through the limestone caves and tunnels of the Pennines, so this must be water falling from a roof. However, that’s the entirety: a flute making a sound like water dripping onto a damp cave floor.

The title track is named after the Hohle Fels caves in Germany, in which have been found the oldest flutes ever discovered. Paul Goodey’s concerto is for orchestra and no less than four flutes. This was recorded live, and de Fleyt is accompanied by the RNCM wind orchestra conducted by Mark Heron, professor of conducting.

It opens slowly with Venus: bass flute, and capturing the mood of someone advancing into the unknown, the music of a 50s sci-fi movie in deep space before it goes all dramatic; the Venus of Hohle Fels, dated to about 35,000 to 40,000 years ago, is the earliest undisputed example of expressly human figurative art. It’s an atmospheric piece, descriptive of being in a dark cave, an experience that may indeed be unsettling and demanding as the music suggests.

It’s demanding, there’s no doubt about it. We’ve had it for some time and kept playing it, but there are no reviews on either Amazon or the record company’s own website, and it deserves at least to be listened to; it’s brave, it takes risks and it’s pushing the boundaries.