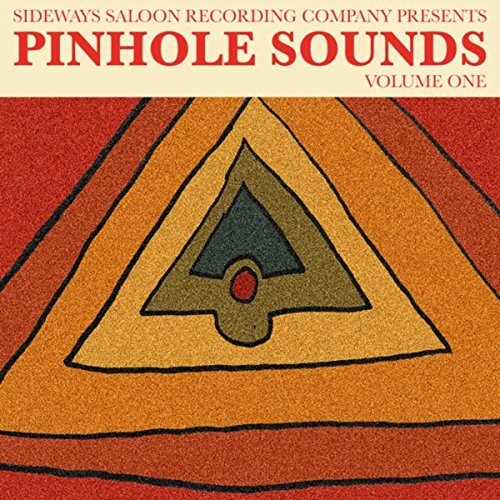 This is technically an EP but it’s also a mini-album, a sampler of work from The Travelling Band and bands they like, featuring Jo Rose and Pit Pony, Barbarisms and A Dyjecinski.

It came out in November and it slipped by us; searching on the internet, it appears to have been scandalously overlooked.

The origins of the EP lie in the band’s Jo Dudderidge going to Nashville in 2015, hanging out with dudes and visiting cool studios. Returning to Manchester (about the time the band’s van and all their gear was famously nicked and then returned), the band’s carpet-covered sweat box studio seemed a bit grim, (“it felt like hell” he writes), so Pinhole Sound Studio was established in the summer of 2015 in Ancoats. From this base, they have been recording The Travelling Band’s fourth album as well as producing other bands from Manchester and further afield.

Pinhole Sounds Volume One is the first in a series of compilations on Sideways Saloon.

The standout song by a long way is a live recording of Borrowed And Blue (live at The Grand in Clitheroe, 2015), departed guitarist Steve “Mugger” Mullen’s final show for The Travelling Band. On the basis of this song they could lay claim to being the English Neil Young: it’s eight minutes long and has the same ramshackle charm of some of Young’s better work. Any Neil Young fans disappointed by his latest releases could do far worse.

The CD (side A on the vinyl) opens with Wasted Eyes, an early glimpse of The Travelling Band’s forthcoming new album, which sees them adding more fuzzy guitar and harmony to their sound.

After the epic Borrowed And Blue, side B opens with Mustanging from Jo Rose and Pit Pony, a hard-to-classify but quality tune weaving scuzzy guitars with tight riffs.

Sweden-based Barbarisms are next with The Two Most Boring Things, of which this is not one. It’s more stripped back and slower than the previous tunes, an interesting mix of Americana and Scandi-pop. It’s the most indie song on the album.

The country feel continues with A Dyjecinski’s The Way of the Buffalo, a slightly off-kilter slow tune. Artur has a voice that’s a cross between a pub singer and Nick Cave, but his baritone is appealing and the music atmospheric.

We always like a good sampler and this is up there with the best we have heard. Well worth a listen.