Vyacheslav Artyomov: Gentle Emanation + On The Threshold Of A Bright World 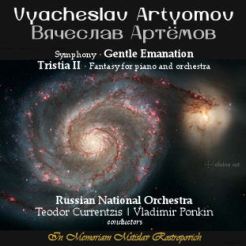 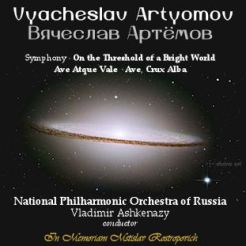 In the review of the Kreutzer Quartet we said that work was on a micro scale, this on a macro, it making the listener think of the vastness of space.

After writing this, we noticed the stellar scenes on the CD sleeves but also that, as a young man, Artyomov was preparing to become physicist, studying music at the same time. According to Wikipedia, he considers music a science and, side by side with astrophysics, one of two main fundamental sciences.

Astrophysics broadens the horizon of knowledge of the universe, music exposes the profundity and strength of human’s spirit, he says.

The music on both CDs is very modern, but it’s a Russian modern, bleak and hostile, invoking the endless vacuum of space. Being honest, this is the type of classical music that scares the novice, a bit like a newbie skier taking on a black run before having any lessons. You need some experience at an easier level before tackling it, though it’s satisfying when you do.

The sleeve notes of Gentle Emanation make the point that greatness involves newness: “You have to get used to things, especially things that hit you”.

Gentle Emanation consists of three movements, presenting the facets of the soul as it tries to reach the light. The composer is religious and the music reflects his beliefs.

On The Threshold Of A Bright World on the other hand is about Russia, a reflection of the events that have taken place. Again, there is religious reference, the Book of Enoch, and again the work portrays a journey towards a bright world.

Both pieces are monumental in ambition, and in sound, making any review a little trite. On The Threshold seems to use low notes to underpin the sound and give the impression of weight. Gentle Emanation opens with single, loud drum beats but possibly uses silence as opposed to bass notes to create a feeling of tension.

Both CDs certainly make an impression. The sleeve notes explain some of what’s going on but Vyacheslav Artyomov demands (in all senses of the word) the listener to make an effort. It’s compulsive listening.

They’re both out on Divine Art, which lives up to its mission statement (“Innovative, Eclectic, Fascinating, Inspirational”) with these CDs.