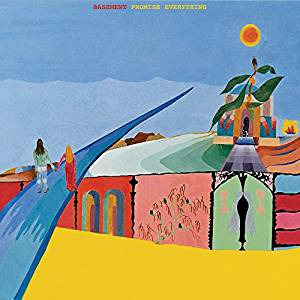 We suspect — based on no evidence whatsoever — that Basement have a fanbase that is madly devoted; they play heartfelt rock that verges on emo. It’s easy to digest but rock enough to be cool. The band members look like lads you’d not mind your son or daughter bringing home, and the sleeve photos show them doing normal shit, yawning in one. The backsleeve has a photo and tribute to Gavin the Goldfish.

Not that Basement aren’t making slick and commercial music. They know what they’re about.

The lyrics are the kind of simplistic but apparently brooding fare that teens lap up: “The letters that you wrote I saved/I won’t read them for I’m not that brave” or “I made mistakes/You give I take”.

There’s even a song about being dead, in a “will I have made any difference” kind of way: “Buried in green under a sun/ Hoping to see what I’ve become”.

Before you ring the Daily Mail, it’s not encouraging mass teen suicide but looking for a way forward: “I want to see the way out/Blinded by the way my feet are on the ground.” See, we’re doing it now, treating simple lyrics with gravity.

Musically it’s standard emo/pop-rock; in fact, they remind us of Puddle of Mudd; Basement singer Andrew Fisher’s voice is not dissimilar to Wes Scantlin’s (at least when sober) and the music is as catchy and as unchallenging as PoM’s, neither of which are complaints. Most of the music is undemanding melodic grunge (as per emo of 20 years ago). There are two acoustic bonus tracks, which we assume are mid-set live favourites.

There are plenty of good moments: Brother’s Keeper has a good riffy opening while the grungy Aquasun has that vulnerable yet riffy sound that many good emo bands had. The cover of My Favourite Game is good, but also a sign of what a really great band can do. We like Basement a lot, but they’re firmly in cult mode.