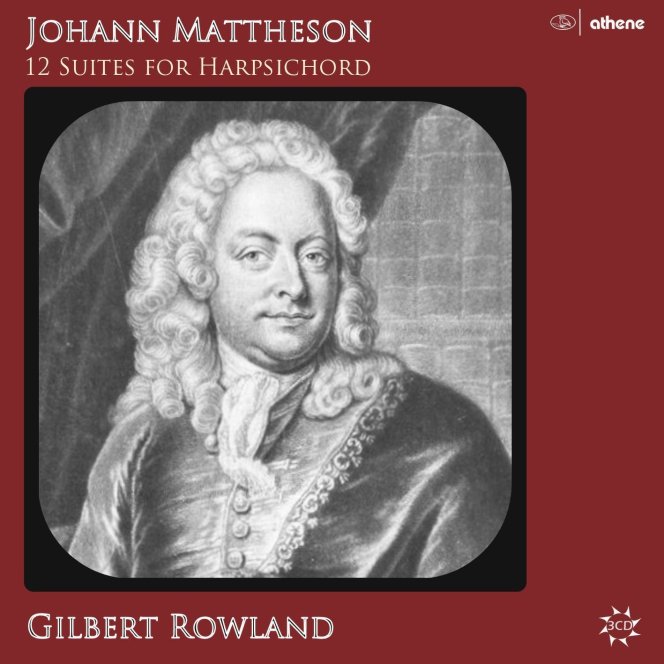 This is one of those CDs that’s hard to write about: a triple CD of music for harpsichord in a nice presentation case and well played. Fans of keyboards need know no more.

This latest CD is out on Divine’s Athene imprint, which specialises in baroque music and period instruments. The CD info notes say that composer Mattheson was a conductor and a friend of Handel, though the two did come to blows in the midst of an opera performance. The sleeve notes mention that Mattheson was a good dancer and fencer, and Handel rashly ended up duelling with his erstwhile friend. Mr Google tells us that Handel had an “explosive temperament” and the two fell out when Mattheson demanded to take over the harpsichord from Handel during a performance of Mattheson’s Cleopatra. The two composers had words, went outside to sort it out and drew swords. During the fight, Handel’s coat button deflected what would have been a fatal blow from Mattheson’s blade, and both men fell over — then got up, smiled, embraced and forgot all about it. Dudes!

While Handel is famous, the sleeve notes say Mattheson is less known, much of his work having been lost in the bombing of Hamburg in WW2.

The playing is certainly fine and the music stands up well to Handel’s own harpsichord music. This was recorded in a church in Hertfordshire and Rowland plays a French-style harpsichord made by Andrew Wooderson in 2005, after an original from 1750 by Goemans. The CDs are roughly an hour apiece, so it’s three hours of quality music.