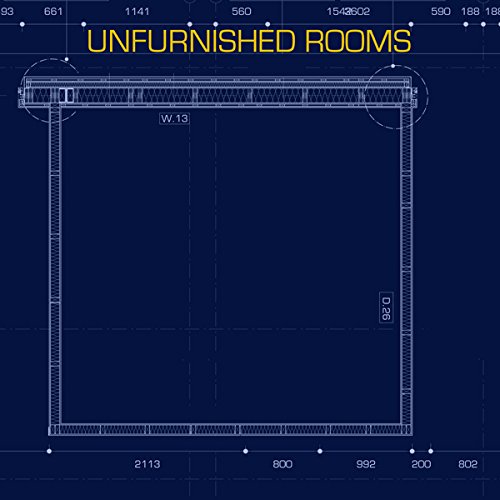 It’s always amazing that, no matter how forgotten the band, there are people who still love them. As far as we were concerned, Blancmange had a couple of hits way back   —  Living On The Ceiling was the biggest — but at the time we just thought “Meh”, even with that song’s attempt at getting a world sound in the charts. Synthpop was too many well-dressed people only too aware of how good they looked.

It now appears that after a 25-year hiatus, Blancmange reunited in 2011, though half the duo (Stephen Luscombe) left because of ill health. Only Neil Arthur remains.

And now this. It’s like synthpop never went away, or indeed changed at all. Robert Plant still sounds fresh and modern, this could have been recorded in the 80s and left in a cupboard.

Having said all that, the lyrics are clever, sharp and witty, and we can see the appeal.

The minimalistic and robotic title track has the narrator “In search of unfurnished rooms”, to whit: “Hall, landing, dining, conclude / I’m in search of unfinished works …. Hung well in barrier-reefed frames”. Then he goes up the loft and finds a wasp’s nest, before the M25 comes into it.

The catchier but equally robotic We Are Chemicals opens with a dryly delivered news flash: “There’s been a chemical spillage / On a trading estate in Altrincham / The area in question has been sealed off / There are no reports on loss of life”.

But it transpires that we are in fact the chemicals and in a garden shed a Tenacious D-like “80 miles due south as the crow doth fly” the situation has been repeated. Meanwhile, in the boot of a hire car … yes more chemicals, seeping through the perforations in a Waitrose plastic bag, before gravity takes hold and ….well, we’re not sure.

The standout is perhaps What’s The time?, a sharp electronic dance tune that’s almost glam rock and lists lists: “What’s the best dog you ever had / The best child you ever bore / The worst crash you ever saw”, and on to the best indie record of all time, and ugliest, most obese and most invisible people of all time (three separate lists).

Arthur’s in a pickle; he’s got the name Blancmange and a fanbase but we reckon if he put this out under another name, people would view it through different ears, as it’s actually fresh-sounding and sharp. Though we suppose he’d be a cult act either way. One song’s called Anna Dine.