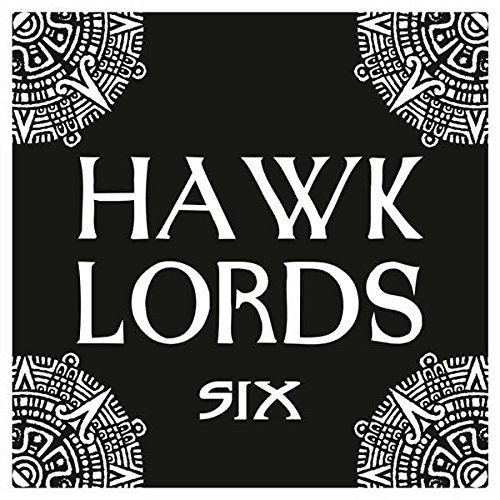 The whole Hawkwind / Hawklords thing is a bit of a problem: if you’ve liked the space rock mothership nonsense since 1823, when Dave Brock first strapped on a guitar, you like what you know and want what you like, and this is it. The rest of us, maybe not so.

Hawklords feature former Hawkwind members Harvey Bainbridge, Jerry Richards and Ron Tree, though Ron is missing from the credits on this so we don’t know where he’s gone. Branched out maybe.

(The other Hawkwind stalwart Nik Turner this year released Warfare “narrating the classic brainstorm over a filthy riff” according to Wikipedia).

We saw Hawkwind at Jodrell Bank this year and were hoping they’d play a set that sounded like this, competent space rock with swirling guitar and prominent snare drum, synths supplying the noise of space ships, but they were a little dull. So, while this is nothing new, Hawklords do deliver the sound you want and expect, and it’s neither too wacky nor lacking in melody. There is of course the compulsory spoken word/poem accompanied by trippy synths. It’s also well produced.

Closer Los Cavatina is nine minutes long, opener Ghost In My Machine seven, by the way. If you’re a monumental Hawk-whatever fan, you don’t need a review because you’ve bought it; if you’re less set in your ways and want some modern space rock, try The Re-TROS.