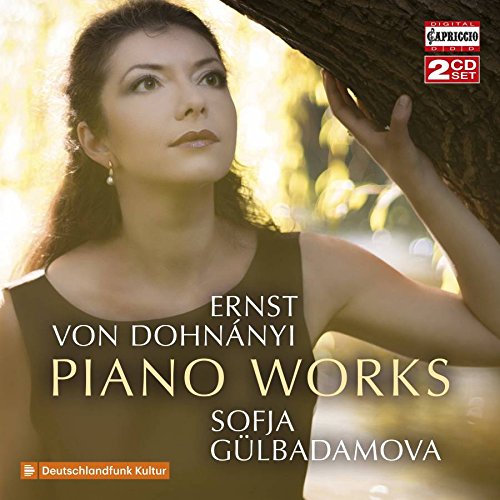 This tranquil and calming double CD has remained on our playlist for several weeks.

We meant to write about it earlier but were too busy being calmed by its sounds to put finger to keyboard.

Erno Dohnányi — or Ernst von Dohnanyi as he composed under — was 16 in 1894, when he moved to Budapest and enrolled in the Royal National Hungarian Academy of Music, studying piano with István Thomán. A favourite student of Franz Liszt, and Hans von Koessler, he was a devotee of Johannes Brahms. Liszt influenced his playing piano and Brahms his compositions, and the music on this CD is expressive, as befits a student of the Romantic era.

Dohnányi was a virtuoso pianist as a young man and it shows in places, with the playing fast and technical. In other places it is more tranquil, and there is a folk influence in some places.

Gülbadamova, a prize winner of many international competitions, is a champion of Dohnányi, whose music is apparently neglected, so she plays with passion and conviction.

Dohnányi deserves remembering for more than his music: he resisted the Nazis as best he could, blocking the creation of a Hungarian Chamber of Music that would have excluded Jews, resigning as director general of the Franz Liszt Academy of Music instead of carrying out orders to fire Jewish instructors, as well as directly helping a number of individual Jewish musicians.