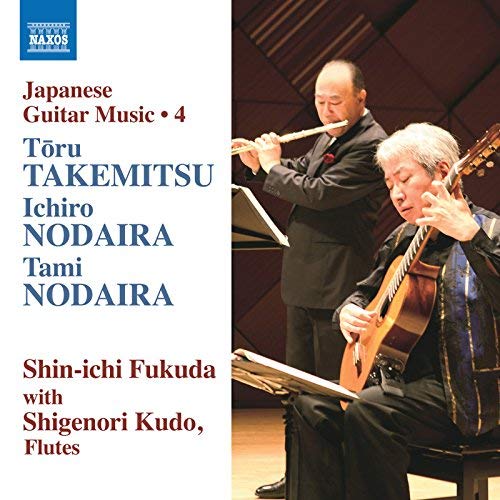 Despite the title, this is actually a guitar and flute recital; works for flute accompanied by guitar. It’s also not particularly “Japanese” in feel; it’s mostly a gentle and almost ambient sound, with little in the way of metre.

“A unique sensibility and an imaginative flair for its colours and expressiveness,” say the sleeve notes but more prosaically we’d say it’s dreamy flute and guitar, the kind of music you’d get on an old documentary about the tranquil yet alien life of a coral reef, The Undersea World Of Jacques Cousteau, or similar.

Indeed, when we checked the sleeve notes, we found out that water was a major inspiration for many of the works. For example, the first piece, Takemitsu’s Toward the Sea was commissioned by the Greenpeace Foundation for its Save the Whales campaign.

Nami no Bon is music by Takemitsu for a television drama dealing with the topic of the Japanese/American families in Hawaii, evoking the peace and quiet of the sea and sky.

Nodaira’s Wave Recollections is “an investigation into the sounds and acoustic properties of the guitar” but recalls the earthquake and tsunami of 2011, the year it was written, while Nodaira’s works include Water Drops.

Apart from odd moments of Orientalism, we think your average listener would hear a more Spanish or least European sound; an album of Japanese guitar for people who like neither guitar nor Japanese music, then.

It’s got charm and it’s tranquil, and for a guitar album it’s going to appeal as much to lovers of the flute. Out now on Naxos, 8573911.