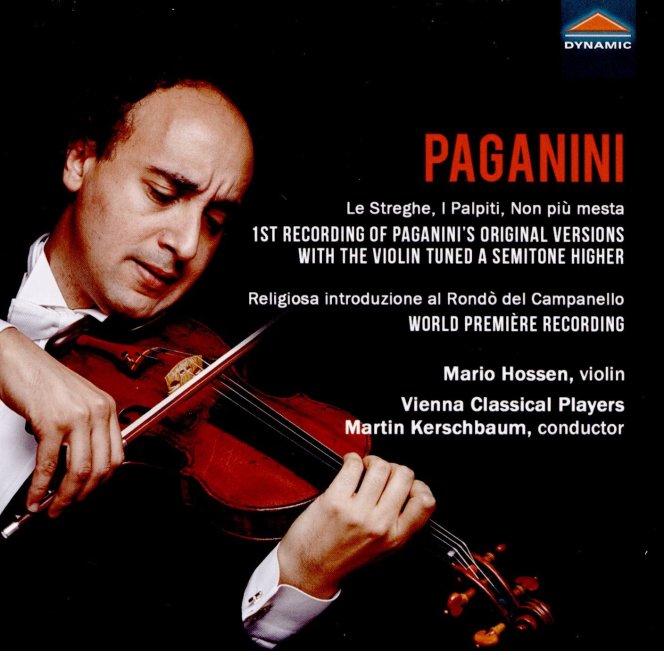 This CD features a world première recording of the original versions of three works by Paganini: Le Streghe — described as a turning point in his career by the sleeve notes — Non più mesta and I Palpiti. A performance of Le Streghe in 1813 in Milan launched Paganini’s career.

The “premier recording” line is because Paganini wrote the music with the violin tuned a semitone higher; this makes D major sound like E flat major, the same key of the orchestral accompaniments. These recordings, researched by violinist Mario Hossen, see the music played as it was meant to be, not that the casual listener will tell.

It’s a playful and fun programme, the music being spirited, and with lots of impressive effects, though purists might think some sections a little over the top perhaps. Wikipedia reports that one of his compositions (Il Fandango Spanolo) featured a series of humorous imitations of farm animals, while Duetto Amoroso replicated the sighs and groans of lovers on the violin. (Played on the violin; the lovers weren’t on the violin).

If you’re a touring virtuoso who makes a living from live gigs, you’ve got to impress your audience.

Hossen, who did the research, obviously plays well and he is accompanied by the Vienna Classical Players under Martin Kerschbaum.

If you want a criticism, in places it sounds as if it was recorded in a small room, but otherwise it’s an entertaining show.