Ward and Parker: One 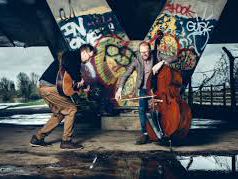 Ward, or it could be Parker, was in Nizlopi, who had a massive hit with the JCB Song (don’t play it, you’ll never get it out of your head). The general tenor of that was a wise but homely narrator who knows what life’s about, doing the right thing.

There’s the same kind of air with this new album. They are two proper working musicians — Parker is a session-playing double-bassist, Ward plays banjo, guitar, fiddle, vocals in The Willows (a band new to us although doubtless where people gather to talk about folk, their name is legendary, aka Mike Harding and Bob Harris fans).

The songs are robust and solid folk/pop tunes. They’re mostly not going to make your soul soar or teach you lessons of an existential nature, but by God they’ll make you appreciate guitar playing.

While the basics are acoustic folk/pop, the album covers multiple genres. Opener Be With Me is a cheery pop tune, with percussion from the guitar body and some fine playing from Ward, both strumming and intricate playing. Ward has a soft and appealing voice. Not Enough opens with a sound that reminded us of more downbeat Iron and Wine, at least until the vocals come in; the rest of the song is on nodding terms with jazz lounge music. Why Worry opens suspiciously like Jolene but slows after four bars — we wondered if it was an in-joke for fans — before becoming a slower, dreamy folk tune, with a faint 70s psychedelic vibe, except for the Jolene Interludes. Make A Vow is very Nick Drake. Standout is possibly Broken My Heart, which, contrary to our intro, does stir the soul. There’s a slight world vibe in places, too.

If you go to indiegogo.com and search “Ward Parker debut album One” you can buy direct from the band, with signed copies and other goodies. For £300 they’ll come and play in your house.