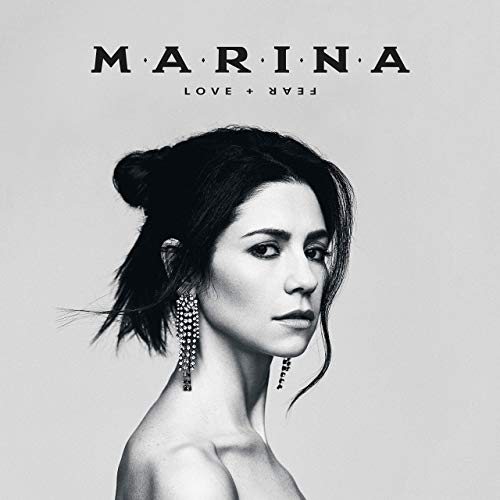 The Diamonds are gone — perhaps she had them recut — and now it’s just Marina. She and her now-resized Diamonds passed us by a little; a bit too poppy. People apparently liked her lyrics although, like the Diamonds, these appear to have been somewhat cut.

This album is also poppy, but appealing. She has two modes, cool indie that veers towards the bland, and holiday pop music, by which we mean those pleasant European pop tunes you hear on holiday in Spain (or Greece, she’s Greek) while you drink a beer and watch the world waddle by. The album has two halves, Love and Fear.

Love opener Handmade Heaven is ok; the way these things work it’s possibly the most like her old stuff, just to reassure old fans. “This life don’t suit me anymore,” she sings ungrammatically, “The writing’s on the wall”. She envies the birds and the squirrels, possibly because birds and squirrels are sociable beasts and she wants to be with birds of a feather. Even if they’re squirrels.

Marina can knock out a good tune but it’s her voice that’s the winner, and she uses it well on the next song, Superstar, which combines a slower verse section with emotive vocals and a catchy Euro-dance chorus. This is a love song, the titular star being her boyfriend.

What with birds and spiders and squirrels, track three Orange Trees suggests she sat in her garden in Greece and looked out the window for inspiration; as with Superstar it’s possible Auto-tunes is helping her voice here but it’s a nice song. Baby goes full-on radio-station-at-the-poolside-bar sound, with some Spanish bloke adding lyrics, Spanish guitar and a bland dance beat — Clean Bandit, those classical musicians who sold their souls for the money of remixes and the “featuring” market — are involved, which explains the blandness.

True could go either way but we like it, though the lyrics have by now abandoned any pretence at social commentary: “Everybody tells you what to do do do / But they don’t have a clue clue clue.” It’s a very catchy tune.

Standout To Be Human closes Love; it kicks off with just Marina’s voice, talking about what she’s done as a pop singer, from travelling the world — seeing Lenin’s body to Chicago and the Greek village where her dad’s from — and the fact that everyone is the same and no-one knows what’s going on.

The Fear half is all the tunes that aren’t optimistic but it’s pretty similar in sound. Life Is Strange and You misfire slightly, the latter a bit bland. Holiday-radio tune Karma misunderstands karma, which does not go around but belongs to individuals; by waiting for someone to get what they deserve the narrator is ironically harming her own karma.

The refrain “Oh my God I think it’s karma” is super catchy though (we assume she doesn’t know God and karma are incompatible).

Overall, a nice album and a pleasure to listen to, even if it is lightweight. Don’t expect any bangers. The only earworm we’ve had is “Oh my God I think it’s karma”. That’s karma for you.