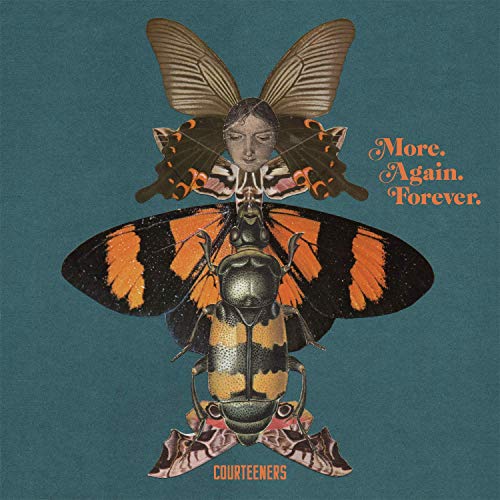 So: Courteeners make a good album shocker. It’s not that the songs are better, it’s just got a groove. Opener Heart Attack has a fat baseline and will be a song fans probably love. The lyric “Here we go / new tempo / pick another song for the radio” suggests business as usual (and fondness for rhyming Os) but it’s not.

The lyric is maybe a little lame but Heavy Jacket’s “Don’t get me started on the lifestyle engineers / Wake up one day with Van Gogh’s hands but nothing between the ear” is better. The song, probably a live favourite, has a beat as solid as an old Glitter Band glam rock 45.

The title track is clever indie and a solid bass line, with a spoken word lyric that talks about (we think) the fact that the more people talk, the less they communicate, though drinking comes into it too. It highlights the band’s strengths and weaknesses — great baseline with a real groove, and jerky, shivering guitar let down by dumb lyrics (“There’s a special place with people like that smug twat”), although “Your shoes are uncomfortable, just like the truth” is not too bad, sadly offset by lines such as “He’d settle for your mind back you can’t wind the time back.”

Better Man is less groove and more tune but nods to — or rips off, depending on your take — REM’s Losing My Religion. We saw Courteeners on their first tour and felt Liam Fray wanted to do more — maybe this is it, he wants to be in REM but instead created indie landfill. This new album is possibly their best, and deserves to win them new fans, or at least fans who live south of Didsbury.