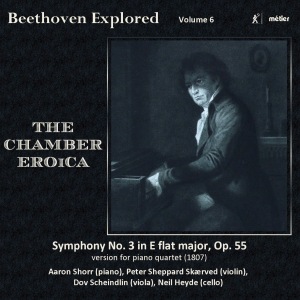 If you dislike “classical” music because of the reverence it provokes — that whole sitting in awe at the greatness of the music thing and bring on the garage punk — then Beethoven’s Symphony No.3 is arguably the cause of it all.
A ground-breaking work, it marked the start of the Romantic period in classical music and contains more emotions than the omnibus edition of Eastenders.
A recent Radio Three programme discussed this work and an expert expressed all kinds of opinions, not least that Beethoven’s own view on how fast it should be played was wrong.
Unfortunately for haters, it’s also brilliant. If it’s any comfort, Ludwig B sounds a bit like Bobby D, who hates people making more of his music than he intended. Of his string quartets, Ludwig once wrote to his publisher: “Thank God there is less lack of imagination than ever before”.
This version is an arrangement for piano chamber music, made shortly after Symphony No.3 was first published, and Chamber Eroica’s Peter Sheppard Skaerved writes in the sleeve notes that whoever did it had access to the original score, ie it was Beethoven or someone very close to him.
The full orchestral piece is reduced to four instruments but retains much of the power of the original piece, while simplifying what the listener hears. It’s powerful but lacks the pomp of the full version (a good thing).
Fans of the piece probably own 643 different versions already but if you’re new to Beethoven, we reckon it’s a very digestible arrangement; it really will have you thinking “Oooh, so THIS is what all the fuss is about”. Out now on Divine Arts (MSVCD 2008).