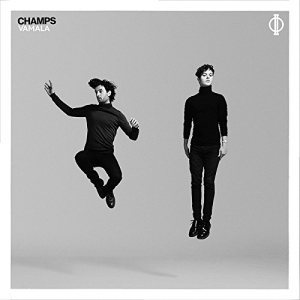 This isn’t The Champs who had that hit with the famous Tequila, but just Champs — it’s brother Michael and David Champion.

The music is mournful folk/pop, as if Simon and Garfunkel were very sad about something like getting old or having silly hair. Or about being remembered for writing a song about rabbits.

There’s something a bit 60s and psychedelic about them, and that hit about a horse with no name kept coming into our heads — they have a similar mournful sound and similar vocals. Don’t misunderstand: hippy horses and names are not mentioned and it’s not in any way country or American, and it’s a bit unfortunate that they’re out the same week as the ultra-catchy Echosmith and the equally ultra-quality Dukes Special, because their music is no more than nice.

Sometimes you want nice it’s true, but nice is just nice. It’s folky but they prefer electric instruments to ones with strings attached.  We can’t really say much about it, to be honest: the word mournful would crop up a lot, the word pop and “nice”. We could probably slip in the word falsetto.

On the plus side, they’re not really like anyone else. Try Forever Be Upstanding At The Door or 3000 Miles, the latter being slightly more upbeat.