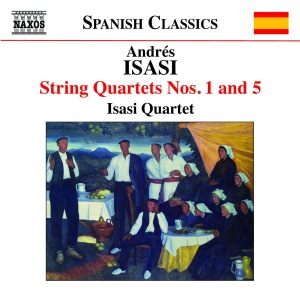 As can be seen by the CD sleeve, complete with Spanish flag, Isasi was Spanish (born in Bilbao) but despite being active in the early 20th century he was a fan of Germanic classical music from the previous century, and wrote accordingly. This wasn’t fashionable at the time and Isasi, who the sleeve notes say was “unworldly by nature”, went off in a sulk and composed at home instead.
His work was played in Madrid and other Spanish cities in the 1920s, which presumably gave him an enough encouragement to continue in his career. When he died he was soon forgotten.
The music on this CD is moderately lively and atmospheric, slightly romantic and pastoral in sound. While it’s gentle there is a certain edginess to it, and it’s thoughtful and technical rather than stirring or evocative. The Isasi Quartet, as might be imagined, specialise in blending the complexity of German music with the warmer southern European music and joined on here by Anna Bohigas on violin and Marta Zabaleta on the piano. It’s nice evening listening as you contemplate the day. Out on Naxos: (8572462).