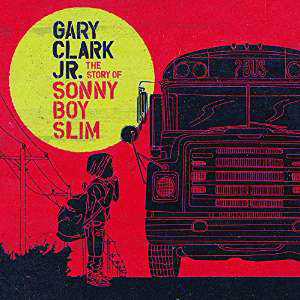 The only thing that’s traditional electric blues about this new CD from Clark is the title. For a man who could presumably get very rich playing formulaic blues with lengthy solos, it’s a good move. Who wants to play dull music for white men in cardigans, after all? Eric Clapton’s got the market covered.
Instead Clark has blended the blues with the music he presumably heard growing up: there’s funk, soul, dance and, mostly, a big hip hop influence. And while Clark does the blues, it’s not the predictable guitar-led blues you might expect.
Opener The Healing and track two Grinder are both groove-heavy tunes, with what could almost be a taped hip-hop loop. The former is the bluesier of the two — despite a strong hip hop opening — while Grinder has a big repetitive, beat that reminded us of Mary J Blige’s Love @ 1st Sight. Clark also slips in some nifty guitar, for the air guitar players.
But Stars is a slow funk track, with Clark singing in falsetto and a layered harmony for the chorus. Our Love and Church are both gospel tunes, the former more soulful and with some sweet organ, the latter acoustic, with Clark playing acoustic guitar and harmonica and his sisters Shawn and Savannah adding harmony.
Hold On mixes RnB and blues and is a harder edged tune, with lots of blues guitar while the next track, Cold Blooded, slows it down again, a gentle soul song with Clark back up in the falsetto range of his voice.
The CD splits itself into side one and two, and side two starts with Wings, which opens with looped drums and hypnotic vocals, being more psychedelic pop than blues, more like Prince than anyone else, as is the funkier BYOB. Can’t Sleep is a funk/dance tune with a disturbingly catchy beat. The album closes with Down To Ride, a fast paced bluesy rock n roll tune that harks back to a much earlier era of music and has a politer take on My Generation’s fast 60s lick.