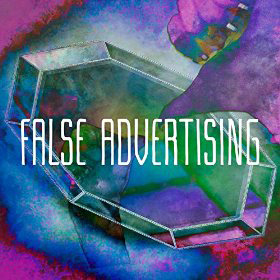 We’ve played this a lot in the past couple of weeks and despite its charms it’s just failed to hit the spot. We can’t make a connection with it in the way you do with albums you really like.
False Advertising are from Manchester and play grunge; you could add “indie punk” to that description but it’s basically grunge.
False Advertising’s sound is crisp and clean. We particularly like the very tight drum sound. The singer is Jen Hingley (niece of Inspiral Carpet Tom), whose vocals give it the indie feel. The guitar is fuzzy while melodic, and what you’d expect from a Nirvana influenced band.
Part of the problem is illustrated in the Press release, where they claim to have taken the “ground splitting sounds” of Seattle and transplanted them to Manchester, except that “ground splitting” music is now 25 years old and not new at all, less ground splitting and more like a long-established rockery.
False Advertising also claim this to be a “ferocious” long player, when it’s not. It’s tame and well mannered, if truth be told. Live, they probably crackle with energy, but that’s not ferocity. Gallows were ferocious.
First song Breaker highlights both the album’s strengths and its weakness, opening with a quiet guitar, then an angular intro and opening verse (lots of tribal toms and slightly Siouxsie-style bass and guitar) before it goes louder, in an attempt to capture Nirvana’s quiet/loud thing. But the contrast is not great enough, it’s too melodic and they’re just not all that angry or confused. It’s more “I’m going to write an angry letter to the paper” than “I’m going to smash the system”.
Ditto track two Another Mention. Track three Wasted Away is more Britpoppy and indie than grunge, while Dozer is more QOTSA than Nirvana, with some metal riffage.
As far as grunge goes, we thought I Don’t Know was quite effective but it’s too well mannered. All Of The Above is endearingly quirky. The album closes to the more QOTSA-ish Something Better, which is more what they are capable of.
We looked on Facebook and Jen Hingley only had a solo album out in February, which was scuzzy pop and something we could like much more, as it had something about it.
False Advertising need to tour this album and decide whether they want to go grunge or pop, as this is somewhere in the middle.