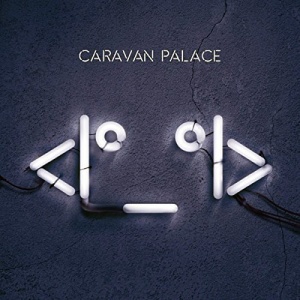 We wish this sort of music — electroswing — was more popular, in the same way that we wish more men wore trilbies and more people called each other Ma’am and Sir as they do in the US. The world would be a more civilised place.
Mr Scruff had a dabble with electro swing, with songs such as Get A Move On, but they were exceptions and on the whole we’re not sure the genre will achieve the same popularity in the UK as it does in Europe. Though this is the 751st best seller on Amazon, which is not bad.
The most famous electroswing tune is the Star Wars one, performed by the Cantina Band (in the Mos Eisley Cantina) as Luke Skywalker and Obi Wan enter that dodgy bar on Tatooine.
As its name suggests, electroswing combines vintage swing / jazz with modern dance music. Caravan Palace, along with Parov Stelar, are probably the leading exponents. We’d guess there’s a cult following in the UK.
Paris-based Caravan Palace are influenced by Django Reinhardt and Daft Punk and this album is entertaining in parts, but it’s one of those albums where the playing of it makes us a little self-conscious, as the sound is distinctive.
The standout tracks are all early on, such as Lone Digger and Comics (which is slightly Fat Boy Slim), with our favourite the jolly and fun Mighty, a mix between a playground song and the background music for a Charlie Chaplin film, with lots of beeps and boops.