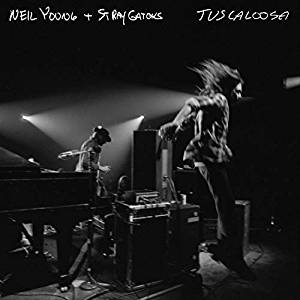 It’s unlikely to win any new fans but it’s a good Young album for old ones. Tuscaloosa features The Stray Gators, Young’s band between 1971-73, playing five songs from Harvest, not long released. His self-titled debut and After The Goldrush also supply tracks. Young is on top form, the band knows his moves and he even offers a little in the way of patter.

The sound is not remastered, so sounds as it did on the day. Young is relaxed and does nothing fancy with songs such as Heart Of Gold, After The Gold Rush, Harvest and Old Man.

He cracks a joke or two, introducing Heart Of Gold with a rambling tale about licensing the music for a television ad (“Burger Of Gold”) but adding: “Don’t clap for this story, because most of it I’m making up and it isn’t true.” The band was Tim Drummond on bass, Kenny Buttrey on drums, Jack Nitzsche on piano and Ben Keith on steel guitar.

We have the CD but the vinyl version is over three sides, with etched artwork on side four.